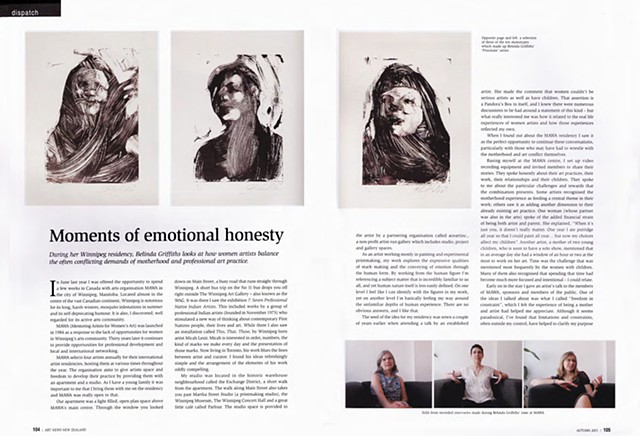 An article that I wrote for Artnews about my experiences during my artist residency in Winnipeg, Canada in 2014

During her Winnipeg residency Beinda Griffiths looks at how women artists balance the often conflicting demands of motherhood and professional art practice.

I was offered the opportunity to spend a few weeks during June 2014 in Canada with arts organisation MAWA. The city of Winnipeg, Manitoba, located almost in the centre of the vast Canadian continent is notorious for its long harsh winters, mosquito infestations in summer and its self-deprecating humour. It is also, I discovered, well regarded for its active artist community. MAWA (Mentoring Artists for Women’s Art) was launched in 1984 as a response to the lack of opportunities for women in Winnipeg’s arts community. 30 years on it continues to provide opportunities for professional development and local and international networking. MAWA selects four artists annually for their international artist residencies, hosting them at various times throughout the year. The organisation provides the artist with an apartment and, if needed, a separate studio. The aim is to allow the artist the space and freedom to develop and further their practice in any way they need to. As I have a young family it was important to me that I bring them with me on the residency and MAWA was really open to that. Our apartment was a light filled open plan space above MAWA’s main centre. From the apartment window you looked down onto Main Street, a busy road that runs straight through Winnipeg. A short bus trip on the No11 bus drops you off right outside The Winnipeg Art Gallery - also known as the WAG. I had been told about an exhibition called “7: Seven Professional Native Indian Artists”. The exhibition showcases works by a group of professional Indian artists (founded in November 1973) who stimulated a new way of thinking about contemporary First Nations people, their lives and art. While there I also noticed an installation called “This, That, Those” by Winnipeg born artist Micah Lexir. Micah has an interest in order, numbers, the kind of marks we make every day and the presentation of those marks. Now living in Toronto, his work blurs the lines between artist and curator. I found his ideas refreshingly simple and the arrangement of the elements of his work oddly compelling. My studio was located in the historic warehouse neighbourhood called the Exchange District, a short walk from the apartment. The walk along Main Street also takes you past Martha Street Studio (a printmaking studio), the Winnipeg Museum, The Winnipeg Concert Hall and a great little café called Parlour. The studio space is provided to the artist by a partnering organisation called aceartinc., a non-profit artist run gallery which includes studio, project and gallery spaces. As an artist working largely in painting and experimental printmaking, my work explores the expressive qualities of mark making and the conveying of emotion through the human form. By working from the human figure, I reference a subject matter incredibly familiar to us all, and yet the human nature itself remains such a mystery. On one level I identify with the human figure in my work, and then on another level I am basically feeling my way around the unfamiliar depths of human experience. There are no obvious answers, and I like that.